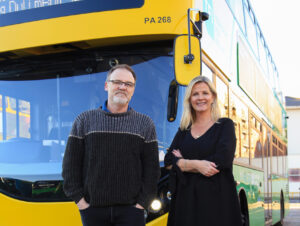 Independent, full-service creative agency Connelly Partners has been named lead creative agency for the National Transport Authority (NTA), which is responsible for overseeing the delivery and development of public transport in Ireland as well as key active travel projects nationwide. The three-year contract was won following a competitive, two stage, three-way pitch. Connelly Partners Dublin will be responsible for the diverse portfolio of NTA brands, which includes the extensive roll-out of BusConnects. The agency was selected for its strategy expertise, creative work, and its full-service offerings.

Connelly Partners Dublin has continued to grow, invest and find success in Ireland since first establishing here in 2018. In just the past year alone, the agency has hired Eoin Welsh as Creative Director, an award-winning creative who, after an extensive career in South Africa, returned to his roots in Ireland and joined the leadership team.

Connelly Partners has also joined forces with ZOO Digital, an independent digital agency which added even further depth to Connelly Partners’ full service offering to clients. The Connelly Partners Dublin management team, led by newly appointed Managing Director Vaunnie McDermott, work alongside ZOO and the other Connelly Partners offices in Boston and Vancouver as an integrated team, working on a number of clients collaboratively across key creative functions including strategy, creative and data analytics.

“We are delighted to be appointed Creative Agency for the NTA at such an exciting time. We’re so looking forward to the opportunity of bringing our defiantly human approach to the NTA and their brands. It’s a fabulous win for our agency, for Eoin our new Creative Director and for the CP team on both sides of the Atlantic.” said Vaunnie McDermott.

In Business: The Rise of Financial Institutions Using Influencers on TikTok to Reach Younger Audiences