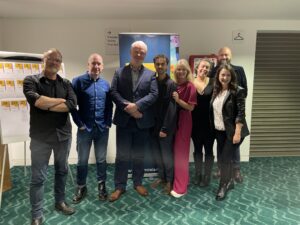 “Figures show that roughly 90% of the money spent on advertising in the UK is wasted, because it’s neither noticed nor remembered.”

Which, as an advertising creative, is not exactly what I want to hear. We creatives like to think of ourselves as do-what-it-takes, blood-sweat-and-tears types, forever fighting the good fight.

Turns out, around 90% of that effort is for nothing.

So, what’s the problem?

Well, that’s the beauty of listening to Trott. In a cockney drawl thick enough to be served in a pint glass, he sweeps aside all the industry-speak and double-talk and cuts to the chase: If advertising doesn’t get noticed, everything else is academic.

So, is our industry in denial? Are we afflicted with a severe case of “Emperor’s New Clothes?” Do we put out work that’s so bare of sticking power that it’s barely noticed? Trott makes a pretty convincing case, and he’s got the data to back it up.

But why? Trott believes it’s because we’ve lost sight of who we’re talking to. He defines advertising as “the voice of marketing” – the interpreter who translates the language of marketing into the language of the real world. But we’ve become so wrapped up in the marketing and business side of our industry, that we’ve lost the ability to “talk normal.” To talk, well, like Trott.

We talk to show how clever we are. How much we know. How much research and study we’ve done. To show off, basically. As Tyler Durden said in Fight Club, “We’ve stopped listening and we’re just waiting for our turn to speak.” Problem is, no-one understands what we’re saying. So, it just gets ignored.

Trott then walked us through some of the straight-talking, iconic brands who never forgot who they were speaking to. While all around them were bragging their lips off to little avail, VW asked us to “Think Small.” Avis told us that they “Try Harder” because they’re only No.2. Nike challenged us to “Just Do It.” These were brands that refused to talk down to anyone. That made the effort to learn the language of the locals whose world they were guests in, while others just did that tourist-y thing of shouting louder in their own language, somehow believing that would help make them understand.

Trott is easy to listen to. He makes sense. He keeps it simple. And so he gets noticed. And remembered (I took no notes during his presentation, and didn’t need any to do this write-up).

So, what did I take out of all this?

Well, if we can all make work that “talks like Trott” – simple, engaging and intriguing – maybe we can learn to speak fluent, Everyday-Speak again. And stop talking to ourselves. Which, if memory serves, is the first sign of madness.

Luxury. Can It Really Save the World?