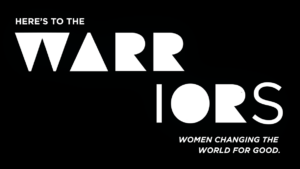 This year’s Warrior-themed annual Ad Club Women’s Leadership Forum came at a pivotal moment, a time where many feel as though instead of taking strides forward, women’s equality has shifted into reverse over the past year. It was an uplifting day of female empowerment, an opportunity to learn and seek inspiration from an impressive range of standout women alongside fellow colleagues and clients I respect and admire.

The forum centered around the power of women’s voices, passion and determination to influence culture, policy and overall societal change on a local and global scale. But above all, one theme that stood out to me across each woman’s perspective was their focus on empathy.

As marketers, we talk a lot about the notion of empathy for others – for our teammates, clients, colleagues, target audiences … but what hit hard with me throughout the conference was the importance of empathy and compassion not just for each other, but for ourselves. As women, it’s our natural inclination to lean into the “mental load” and take on as much as we can, often without realizing the effect.

The importance of starting with yourself in order to empower others and drive change resonated with me in three key ways:

One of the most remarkable speakers of the day was Andrea Campbell, the Democratic Nominee for Massachusetts Attorney General. Campbell lost her mother to an accident at eight months old, didn’t meet her incarcerated father until she was eight years old and lost her brother, who passed away in prison. Despite these adverse circumstances, she went on to become the first member of her family to attend college, going to Princeton, followed by UCLA Law, and was elected to Boston City Council in 2015. While this is an admirable story of perseverance, what resonated with me most was the mentality she embraced to get where she is now.

Campbell refused to let the immediacy of her early childhood define her and from a young age she knew she was more than the traumatic family experiences that surrounded her. Despite moments of  imposter syndrome that so many of us face, she fostered an inherent confidence in the value she brought to each day and focused on what she could vs. couldn’t do. She started each day by celebrating herself, what she had accomplished and what she wanted to accomplish – as she says, doing her “mirror work” as a morning affirmation ritual to take on the day’s challenges. By starting with herself and the unwavering determination to own her story, she was empowered and braced to give back that empathy and compassion to so many others in her life.

Be Your Own Best Advocate.

As colleagues, mothers, spouses, caregivers and friends, our focus is rarely on ourselves and society is quick to reward and recognize women for our selflessness. New York Times Bestselling Author, Eve Rodsky, talked about the need to be consistently interested in your own life – as much as you are for the work and lives of those around you. Fittingly, when I started to write this note on my phone during the conference, “family life” automatically popped up before I could type “own life.” [Sigh], even iPhone algorithms are set up to hero female selflessness.

Rodsky says that by being your own champion, you’ll in turn be the best advocate for those around you. Her work is centered around solutions to combat the mental load of women shouldering ⅔ or more of the unpaid domestic work and childcare for their homes and families. She brings the honest perspective on the inequality of her own previous marriage and has developed a gamified system for partners to evenly distribute domestic responsibilities of “invisible work.”

Rodsky offers a practical day to day approach we can apply vs. other abstract advice around inconsistent self care and “you time” that don’t actively alleviate the chaos of everyday core responsibilities. Through her interviews of more than five hundred men and women, she developed a list of 100 common household tasks and the guidelines and discussion points for how partners can prioritize and get it all done, together. Empathy for ourselves, prioritization of our own needs and a practical system that alleviates tangible work can help lighten the mental load and create space for a truer, more present version of ourselves.

Don’t Judge What You Don’t Know.

With the reversal of Roe vs. Wade last June, women’s physical and emotional health has taken center stage as passionate advocates on both sides make their case. Guest speaker and award-winning author, Jennifer Haigh’s, new book Mercy Street highlights the disparate perspectives on all sides of reproductive justice through the stories of the workers and protesters at a Boston clinic. The book is based on her own experience volunteering at a women’s clinic, and while she is pro-choice, her main point is that regardless of stance, “the majority of people know very little about what abortion actually means in an individual personal’s life” or the empathy each woman must have for herself in order to make the right decision.

It’s a statistically common experience, as one in four American women will at some point have an abortion – but each situation is unique and deeply intimate. At the crux of her pro-choice belief, is the notion that each woman knows what is best for her body based on her individual circumstances and experience. Female intuition is powerful and extremely personal. The “climate of secrecy” society has fostered around the issue limits honest dialogue and perpetuates stigmas that many cannot see past. She argues that having empathy for ourselves and our right to make the right choices for our own circumstances and bodies will foster empathy for others and break down the knowledge gap on both sides of the issue.

The inspiring women at this year’s Ad Club conference were an important reminder that while a “warrior” paves the way for others, that perseverance often starts with an unwavering dedication to and respect for themselves.

Luxury. Can It Really Save the World?