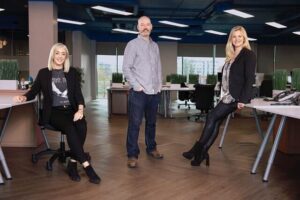 We’re pleased to announce the promotion of Vaunnie McDermott to Managing Director of Connelly Partners Dublin. In her new role, Vaunnie will have responsibility for all operational and financial decisions for the Dublin office, working in collaboration with sister Irish company ZOO Digital.

Vaunnie has over 20 years’ experience working as a marketing professional from both an agency perspective and extensive in-house experience with RTÉ and the Irish Examiner. After running her own business for 10 years, she was recruited to Strategem in 2016 to drive new business. Vaunnie has been part of the management team at Connelly Partners Dublin since the Strategem buy out in 2018 and since 2021, has been one of the three-person leadership team which has run the agency.

Speaking about the appointment, founder and President Steve Connelly: “There have been incredible developments for Connelly Partners Dublin over the last year – the calibre of our clients, the creativity of our work – and Vaunnie has been integral in that success. She so deserves this appointment and frankly, we’re lucky to have her. There’s a great next chapter ahead for our Dublin team.”

Continuing the integration between the global offices and furthering our client service offering and creative output, this news also sees new roles for Mary McMahon and Ronan Doyle.

Mary McMahon has been named Group Strategy Director for the Connelly Partners global network, which has a presence in Boston and Vancouver as well as Dublin. While she will remain part of the Dublin leadership team overseeing strategy projects, Mary will also be leading strategy for the growing CP Health practice, which will be soon expanding into Europe.

Ronan Doyle will move to the position of Global Art Director, focusing on senior art direction and major creative projects for clients across both sides of the Atlantic. A new Creative Director will join the Dublin Leadership Team soon.

This news today builds on recent strong expansion by Connelly Partners, both in Ireland and globally. Since recently joining forces with the award-winning digital agency, ZOO Digital, the Dublin office has just hired seven new people to join the team across copywriting, UX/UI and graphic design disciplines. The combined teams of Connelly Partners and ZOO have also successfully won new American business, working collaboratively with the Boston office which will also be announced soon.

In the coming months, we’ll be furthering our offering to the Irish market by launching a more enhanced media and analytics offering to clients and will be expanding CP Health to Dublin.