No problem, Stephen Piotrowski, our Managing Director of CP health is here to help you. get in touch

No problem, Stephen Piotrowski, our Managing Director of CP health is here to help you.
get in touch

When a Coffee Turns Into So Much More… 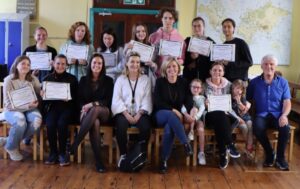 Right beside the Connelly Partners Dublin offices is an incredible place, called the Fair Play Cafe. It makes great coffee, superb sandwiches and opens early, baking its own range of fruit scones. Bliss. Yet it does so much more to help the local community here, as we found out recently.

How the Fair Play Cafe, ZOO, Connelly Partners, Google and a whole range of local businesses all ended up working together to help (in a small way) the Ukrainian community here, all started with a decaf Americano and a leaflet. See, the Fair Play Cafe regularly runs a hospitality and barista training course for the local Ringsend community – where, over an intense two-week period, students learn coffee making, pint pulling, cocktail shaking, food preparation, top customer service skills and all the other elements you need to work in a cafe, restaurant or hotel in Ireland.

Just how quickly a group of strangers can move to work together is simply incredible. Two days after one of the ZOO team inquired if this course could be adapted for the Ukrainian community, three people met in a room – Teresa from Google, Joe from Fair Play Cafe and Andrea from ZOO. The first question put to the group was so telling – “so, what roadblocks do we need to move to make this happen?” And happen it did, three weeks later.

It was a real community effort to turn this initiative around with the ZOO and Connelly Partner teams giving so much. Hours of organisation were contributed, team members met our Ukrainian students on their first day at their bus stops to walk them to the Cafe so they didn’t get lost – and so many of the team contributed €10s to help pay for a lunch for the students, so there was one less thing for them to have to worry about. Thanks to the Ukrainian Matching Fund at Connelly Partners, as well as our team knocking on the doors of other local businesses in our office block, every lunch, coffee and cake our Ukrainian students needed during their course was taken care of. Other local funds help to pay for transport, and many of the trainers of the course (including baristas just back from the World Championships) all waived their fees.

And it wasn’t just lunch or just a walk. Joe, the main organiser of the Fair Play Cafe, captured it so well in his thank you message to us: “After everyone left the building [after graduation] except for my wife and I, we just sat with them all and chatted with them for over an hour. It slowly dawned on us that they were reluctant to say goodbye to each other as they had formed a special bond of friendship and mutual encouragement, with the older ones acting as big sisters/mothers to the younger ones. There were a lot of tears among them when they finally said goodbye to each other and went their separate ways. Before they left, we assured them that we will organise a BBQ for them all again in a few weeks time when the weather improves.”

It’s the power of a coffee. And a cafe. And a community. And if you’re ever in the Dublin office, make sure to visit the Fair Play Cafe. You never know what could happen.

Keeping it Real: All Ro(ads) Point to Authenticity for Gen Z